I don't spend a lot of time in the garden at our apartment building. Most of the women and a few men sit by the planter in the shade - smoking - I guess because it is close to the door. There are two other areas with a netting of sorts that is to act as a shade - not!!! and to protect from a drizzle if there is one - not!!! If I do go out I sit under one of those awning things and write or draw but not in the hot sun or when we might be getting rain.

So where am I going with this story?    Pictures. 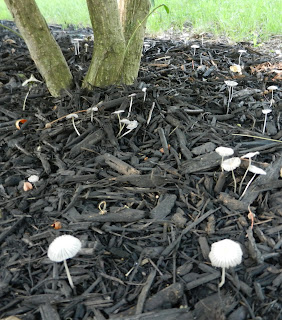 The maintenance man was able to squeeze money out of the budget for some mulch to keep the weeds down. There are a few Hostas growing there.  Last year they put in a watering system that waters the mulch ever couple of days. One early morning I went out to listen to the birds and there were these funny little white things that popped up in the mulch.

Don't know what they are - assuming a fungi of some sort. Didn't think of taking a picture then when they were all over the place. I waited until yesterday after temperatures of 90 degrees or more on Saturday and found just a few. 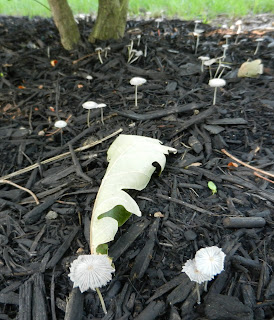 I believe they come out when it is damp and then die off or recede when it is dry and hot. I particularly like the picture to the right with the large leaf that the squirrel probably knocked down.

The fungi aging and dying

Carol likes to add things to decorate - here is her dog Buddy beside the large pinwheels she put in the garden in early summer.


A four foot planter in the garden with some additions to the flowers. 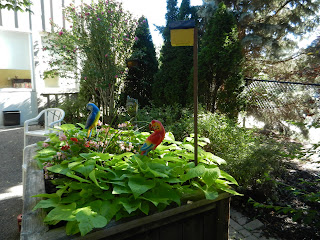 A resin bluebird house with a few additions stand in the corner of the planter. 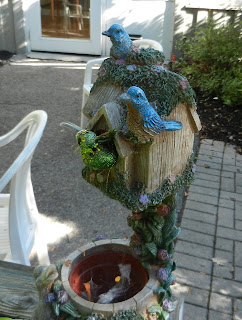 Another neighbour down the hall added some parrots to the planter. 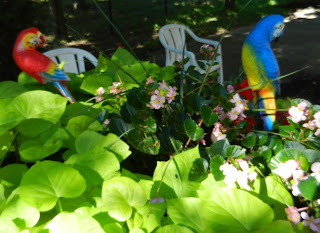 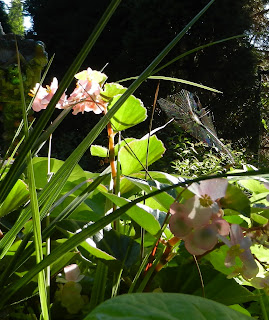 And this morning there was a spider web glistening in the sunlight - iridescent and sparkling.
I don't know if you can see the colours - maybe it is one of those "you had to be there" things. 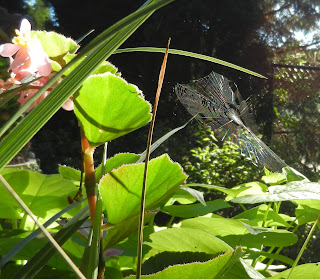