New information? New awareness? I know that I will have a new radiator in a few hours.
The ankle I sprained a week and a half ago feels much better with the ankle brace and I assume it is healing. I brought my van to the garage my son-in-law works at, they are very nice and very helpful. They tested it this morning and I'm back  this  afternoon for a new rad. They have let me sit in the office and they even set me up on the computer so I can write and fill you in on what's happening.
I've been working on the genealogy for our family and while entering the data on dad's sisters and brothers I entered aunties birthday and found out that she isn't 93 after all. She is 94. I enjoy every minute with her and she has been helping me with the information on the Masters side of the family - gramma's maiden name. She hasn't been feeling well as I mentioned before and yesterday after her abdominal scan she said, "maybe I'm just tired of living" and I put on a brave face.
Today when I went to the retirement home she having coffee with the ladies as they waited for their goodies to bake. She's up and down and she did mention that she would se how things go this weekend. It is our monthly trip into Toronto to visit her son, who is slighly handicapped, and to visit her sister who is younger than her - I believe she is about 85.
So I'm being  realistic but wishing for more time. She will let me know if there will be anymore trips to Toronto and how she  is  feeling.
Oh, and I picked up my airline tickets for my trip to Florida in three weeks if all  goes well.
Since I brought my sewing for the story book illustrations I better get started. Pictures coming later.
Posted by bh at 10:47 AM 1 comments

I have been in a silent fretful mode trying to figure out how to help my auntie who just turned 93 on March 10th. Uncle Jesse passed on March 16th one year ago and I know that she has been grieving and maybe has gone into a bit of depression again the closer it got to the anniversary of his passing. I can't help her through that.
She also seemed to be off her food as she says - not having an appetite, not wanting to eat much, not knowing what she wanted to eat etc. etc. etc. I started to get worried and then realized that she might have a bit of a cold or flu bug.
So why am I telling you all this? Well I guess it is background information for why I fell. I did fall on Tuesday morning because I wasn't concentrating, I wasn't watching, I wasn't in the moment as they say. I was watching the man back out of his parking space next to mine and stepped off the sidewalk in the wrong way. Not a clean step and down I went. I tried to break my fall landing on my knees and my right shoulder. Marty, the little ole man put his car in park and came rushing over to help me- shuffling as fast as he could. He helped me  up, and when he bent over to pick up my keys and my book the thought popped into my head "maybe he shouldn't do all that bending over", but he did it and wouldn't leave till I assured him I was okay.
I limped a little as I got in my car and drove away. I thought maybe the shoes had something to do with my falling but actually that wasn't why I fell. I fell because I wasn't paying attention. I was worrying about my aunt, I was thinking of all I had to do, and I was angry at myself for trying to do too much. I'd signed up for a bead work class to learn how to do this bracelet and I don't even wear bracelets. I also wanted to go and visit auntie because I was worried about her. I was thinking of the two meetings the next day and my art project that I needed to finish before April 6th so it could go into the gallery for the show.
See what I mean? I wasn't in the moment. I was in the past remembering how my aunt was feeling and if truth be told I was also worried about her dying because after all she is 93. I was also in the future about how that would be without her, how much work that will be to take care of her estate and on and on and on. Awfullizing as my friend says.
So, as the days have passed, I've slowed down, luckily no broken bones but there was a bit of a sprain on my already weak right ankle and I'm noticing a bit of soreness on my left arm and shoulder, probably from trying to stop myself from my fall.
Today I'll be working on my art project and later I'm going to have lunch with my daughter and then tonight my son is taking me out to supper to celebrate my grand-daughter's 30th birthday. I'm so lucky in all respects. Have a good one.
Posted by bh at 4:21 AM 1 comments

Today is my aunt's 93rd birthday. We are going to lunch and shopping. She will shop. I will try to buy lunch, I don't know if I will succeed or not because every time I try to buy she says no. Maybe today she will fool me. So what does this have to do with the title of this post? Nothing. I am just waiting till it is time to go and pick her up from the retirement home. While waiting I decided to scan the pictures and show you more of Oscar.

I spoke of the book that I couldn't find - I found it. It is a book that my friend Deb made for me while they watched Oscar in February of 2008 while I went to visit my friends in Florida. I was away for a week and they had a ball - so Deb tells me. She and Oscar wrote stories and they took pictures. This is the beginning of the book. They said Oscar was at Camp Slippery Slope because they have a sloped driveway and sometimes it is icy and hence the "Slippery Slope."


They spoiled him. They had a dog they named Blue who died a year or more from complications from diabetes. Oscar was their opportunity to see about getting another dog and their schedules. In this picture to the right Deb is getting some of his treats because he's been outside and has been a "good doggy" and because I'm such a mean mommy she says cause I don't give him treats. Oscar was a great dog that just loved people. He didn't like other dogs so I had to watch when I took him outside for his walk. Sometimes it could be tricky in the hall way of the apartment building with the other dogs coming and going as well. I had to remind him that he didn't own the building and he had to share.

I have a few more pictures to share with you but I'll wait till another day. Thanks for reminiscing with me. Have a good one.
Posted by bh at 5:43 AM 1 comments 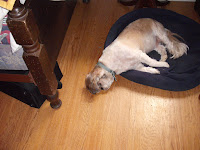 Today while surfing my pictures on the computer I came across a picture of Oscar. Mind you, this is not a good picture. He seemed to like to just flop on the bed with me more than in this dog bed. Of course he'd have to make a nest on the bed and often I'd have to tell him to just like down - especially when he was clawing at the quilt on the bed. When I was working on the computer or a piece of art or reading he'd consent to sleep in the dog bed. He would go round and round in this bed of his and make a nest and then about five minutes later I'd see him like this - crashed like he passed out. Sometimes I'd even go over to see if he was still breathing. So that is one view of Oscar. When I find the others I'll post more.
Posted by bh at 7:18 AM 1 comments