The last post I showed you pictures of the doll 'Rainbow Woman' that I made for my grand-daughter. I also said that would be the last doll I make of that kind for a while. I said that before. I'm not sure if I will make another doll of that style but let's just say "for a while" instead of never again.
These dolls are submitted to the Woodland Cultural Centre Gallery for the upcoming First Nations Art Show. They are Crow Hop

I don't remember which is which. I think I named the one to the right Eagle Dancer and then Crow Hop was the one with the blue face. They have changed since they left on their trip a few years ago. And again I'm having trouble getting them in place. I think they are still celebrating and don't want to do what I want them to do. 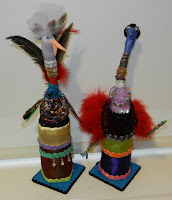 Just to let you know,  they do have a great time together and have talked about going on other trips. I haven't decided where they will go or even if they will go anywhere - especially together. They seem to get into a bit of trouble and I find that they forgot to bring home the outfits that they left with.


I made another art piece for the show that will open on May 24, 2013 but I don't have a picture of the finished piece. It is called the Tree of Life and it is a tree covered with butterflies. The butterflies are then embellished with beads of all kinds as well as embroidery. I will post that in the next update - when I get a picture to show you.
Posted by bh at 11:42 AM