Well, I was able to go to the camera shop and find the cord for the camera. 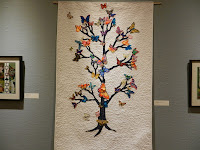 This is the quilt as it hangs in the Woodland Cultural Centre Art Gallery until the end of this month. I mentioned that I worked on this while I sat with my aunt and uncle and had it finished just two days before she died. My cousin Ron, who is their son, is also a fabric artist who makes pictures of crewel embroidery using just ordinary four ply yarn. My quilt is hanging between his two pictures in the gallery.

I downloaded pictures that I took on my trip to the Rochester Museum of Science. There were a lot of artifacts of beaded clothing from the Iroquois but the ones I wanted to see were in Germany on loan to another museum. I was told that there were some in Albany but I don't know if I will go there.
This next picture is one of the ones in the archives at the museum. It is bead work done by Caroline Parker - the sister to Ely Parker who was a General in the United States Army and adjutant to Ulysses S. Grant.You can find all kinds of information on Ely Parker on the internet if you are interested. 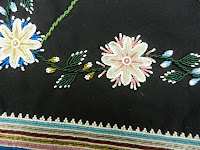 This piece was part of, if I remember correctly, a shawl. I'm not sure now. I'm not an historian that takes pictures and documents them in a "correct" manner. I take pictures of what I like to see.
This next picture is of bead work done by someone else. I don't have the names - because the museum doesn't have the names of most of the artists either. A lot of the pieces that museums carry are "collections" from Army, Indian Agents, and other affluent people who could buy things. This piece is a "Glengary Cap" 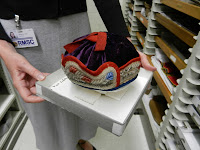 being held by one of the curators at the museum. She wasn't sure if it is one worn by the Iroquois men or the women as both were known to wear that type of hat.
These hats were modeled after the hats worn by the "visitors" that came to North America but these hats were decorated, as a lot of their other pieces of clothing were decorated, with beads. Maybe I'll sort the pictures and show you more later.

Right now I'm off now to go and visit friends in Massachusetts, Connecticut and maybe Vermont. I'm going to see a play in NYC with my friend Donna and we are going to visit our other friend Maureen. Then to a writing retreat in Connecticut. I may go and visit my friend in Montreal on my way back home. That too hasn't been decided. So  I will see you when I see you. Have a good one.
Posted by bh at 4:48 AM